Abu Jafar (Visual Artist / Sculptor) is an acclaimed leading British International artist and Philosopher of the arts who lives and works in the United Kingdom. Born on March 21, 1968, in a small village called Jhilna, Patuakhali, Bangladesh.

Over three decades of my artistic journey, I have had more than 128 exhibitions including 24 solos, 7 two-person and more than 97 group exhibitions here in the UK and abroad. My artworks have been collected all over the world.

I studied Philosophy of Arts, Open University 1997 UK, Art and Art History, Goldsmith’s College, the University of London UK in 1991/92, Master Drawing of the human figure - Guildhall University, London in1989/90 UK and Fine arts, painting and drawing at the Institute of Fine Arts, University of Dhaka, Bangladesh 1984/89.

In 2007 Become an Associates Member of the Royal British Society of Sculptors, in 2008 become a member of the Sculpture Network and in 2011 become a Fellow of Digswell Arts Trust, UK. I am taking my inspiration from psychology, philosophy, classical music as well as day-to-day human existence. By producing art that is far from traditional, I am actively attempting to shatter staid ideas of the past regarding art; my art is the synthesis of the colour, element, and presentation twisted into unusual form. Most of my large scale Installations involved nature, the public, and the environment. My work simplifies our daily lives and the diversity of mankind in my imaginative notion in a way that reflects imaginative power and the ever-changing creative flow of new formative arts. Here are some comments about my work and me:

“Abu Jafar is a committed and established artist with a strong exhibition record in the UK. His use of a rich range of media and breadth of concern have earned the artist the wide respect of his peers in London.” -Marjorie Allthorpe-Guyton, Former Director of Visual Arts, The Arts Council of England. UK

“ Abu Jafar is a very energetic and gifted artist who has worked in a wide range of media, including installation/ performance as well as sculpture and painting.” -Isobel Johnston, Former Curator, Arts Council Collection London UK "His installations are placed in our public spaces -in amongst our everyday lives. Their beauty and lack of pomp garner our curiosity-we approaches them openly. Curiosity is the most wonderful of human instincts because it removes us from the momentum of our daily lives and it opens our minds. In opening our minds we can explore new ideas, imagine positive change and therefore create our own new sense of coherence. This coherence gives us hope; hope gives us the ability to create our own futures based on the new context we find ourselves in. Abu's work isn't an explanation of hope, it is a gift of hope to those who engage with it" -Anne Cunningham - Chief Executive The Art House

"Hope can be static and even negative but a positive form of hope perhaps involves the movement of a journey. Abu Jafar's series of installations invite a 'journey' from one to the next, but the viewer can also journey among them, catching the changing reflection of light through the various piece of coloured glasswork, studying the carving lines of patches of colour inscribed on each installation...Making meanings of all this can be seen as a form of fruitful involvement, of hope" - Mark Treharne – Author

“ What impresses a viewer a Jafar’s painting though his meagre output notwithstanding, is a sense of total dedication that he brings to in his work. One feels that Jafar is pouring out his whole being in his work, which speaks of his deep convictions and his belief in humanity and the power of love to transform the world, Amour Vincent Omni could as well be a natural theme for Jafar”. -Professor Dr S. Manzoorul Islam, University of Dhaka. “His work is vibrant in colour and depicts the brighter side of life, paintings of internal love between man and woman as well as humanity and harmony between people. The desire to depict on canvas a world free of suffering and social injustice has been furled by his own experiences and his determination to succeed as an artist has given him a greater insight into the struggle of others” -Debbie Sellman, Art Critic, London. “Jafar’s grasp of subject power of vision and ability to assimilate may surprise many” - Late Anis Choudhury-Dhaka (Writer)

The blurring of the distinction between figure and ground is a major factor in decorative art. In the classical arabesque rhythm and pattern sweep both terms into an active mixture. In Islamic traditions writing and decorative design become similarly fused, design and sign become one form. Jafar’s work welds together signature and painterly decoration as a ground, which then, (after a while) emerges as a figure working energetically within the environment. This shared emerging figure is endlessly at home because it continually draws its own ground. Rather than basing a landscape on a grid, we find its foundation in the movement of a dynamic arabesque in a flourish of signatures. -Phil King, Artist & Art critic, London 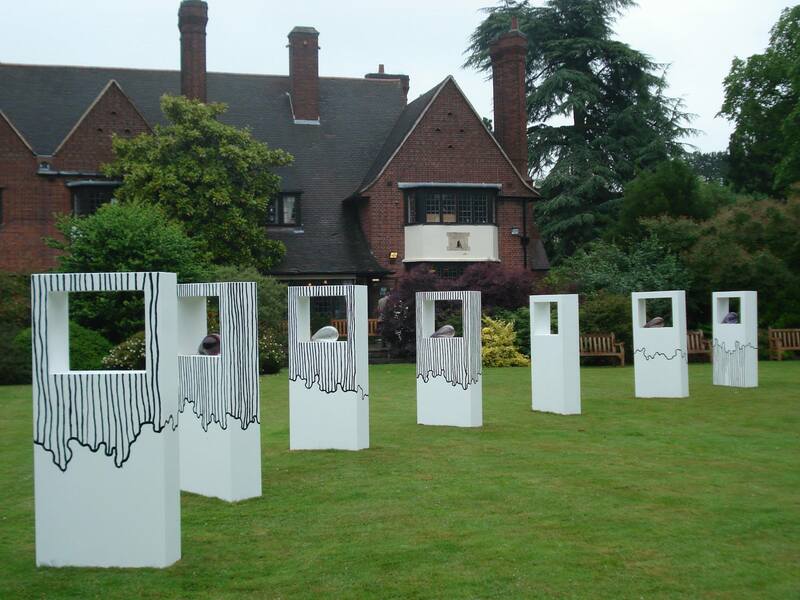 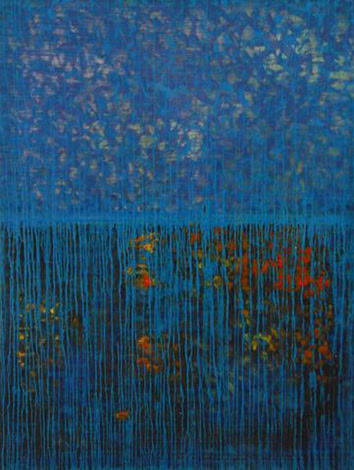 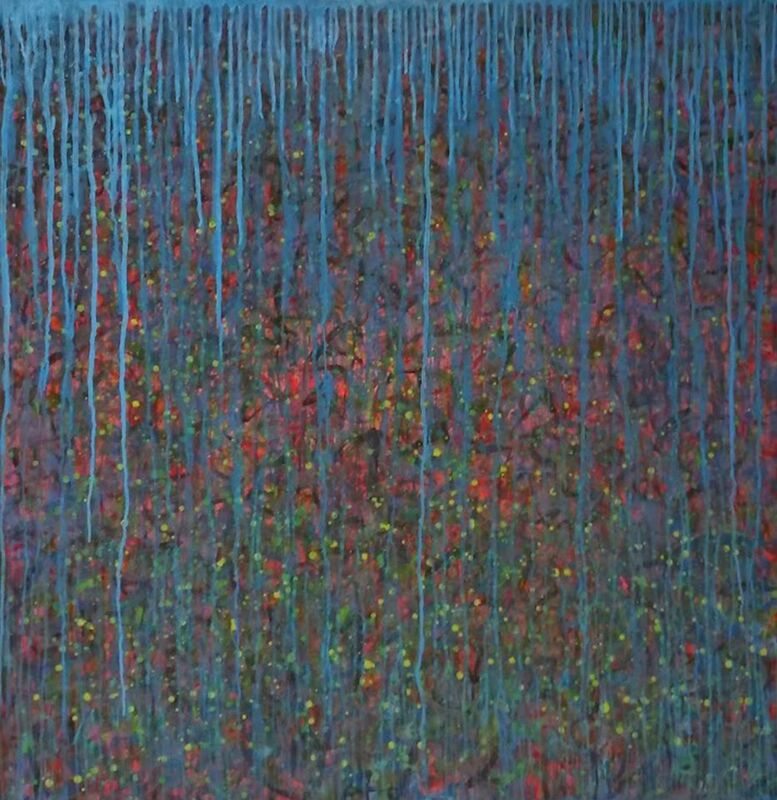 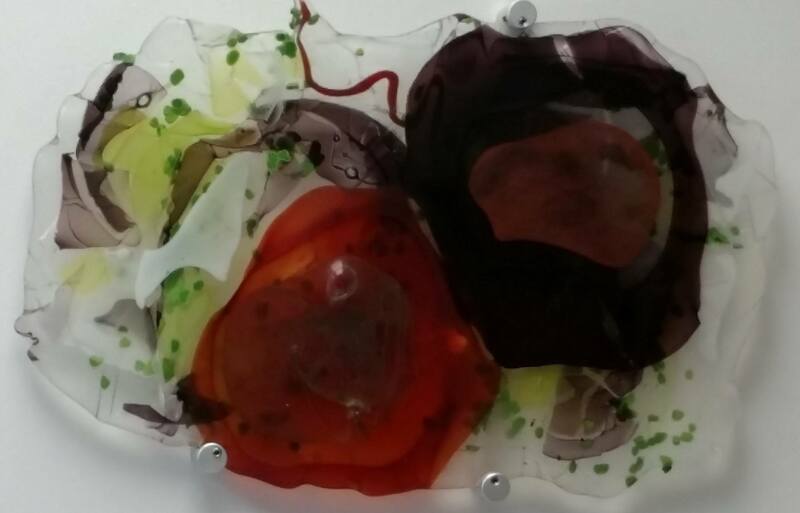 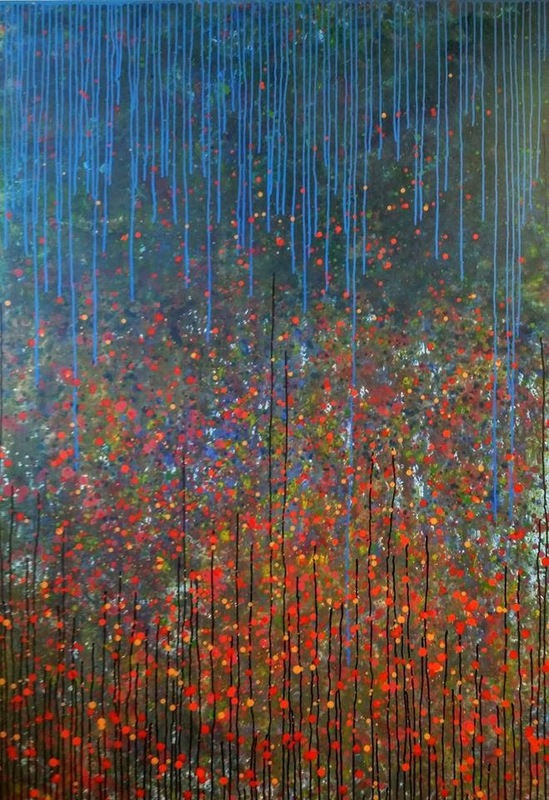 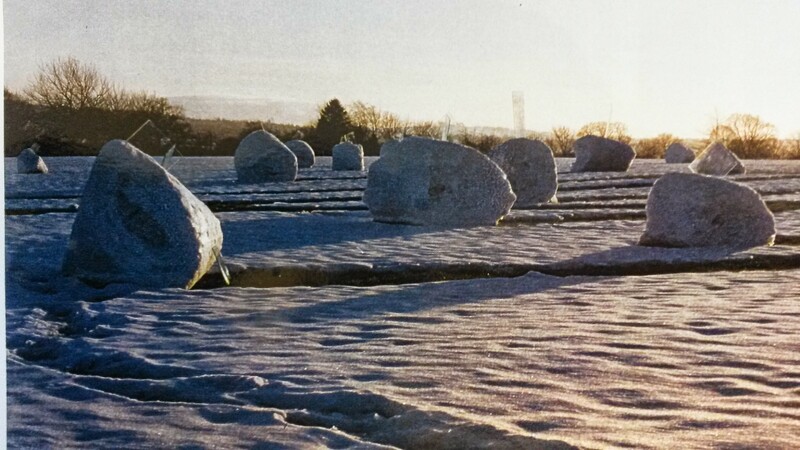 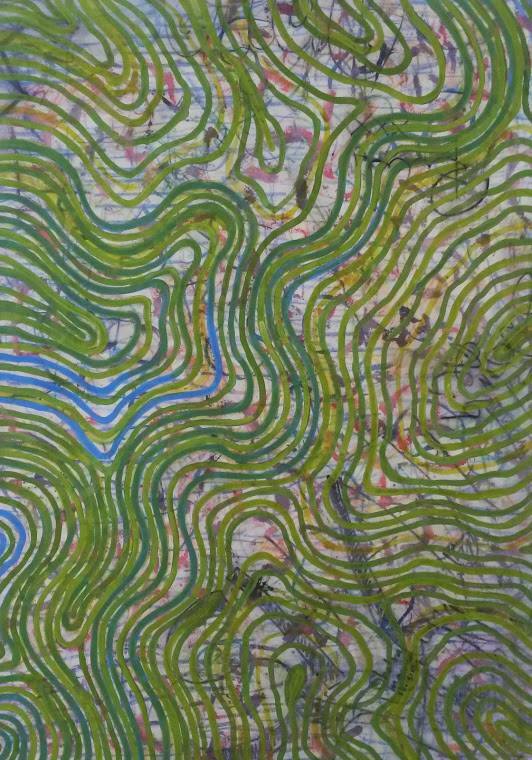 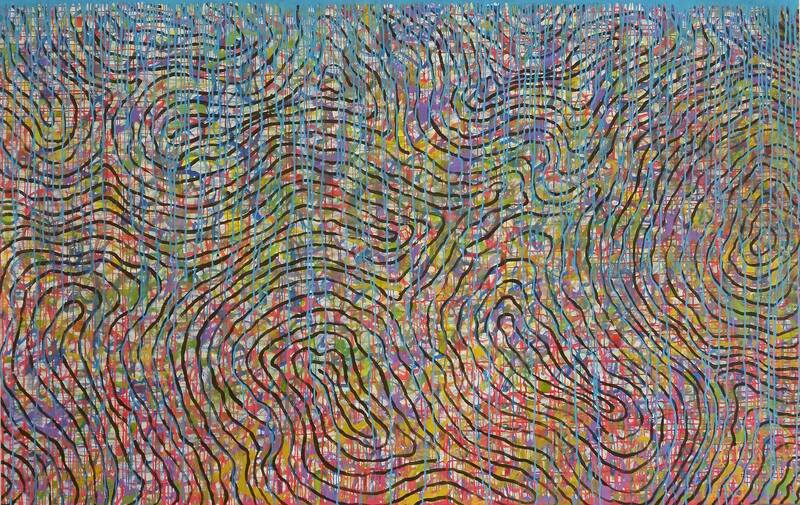 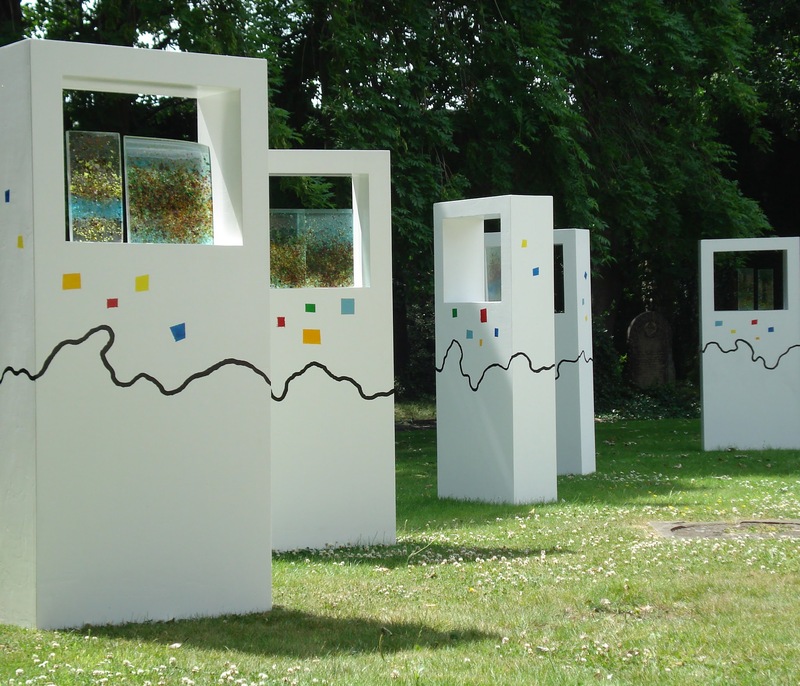 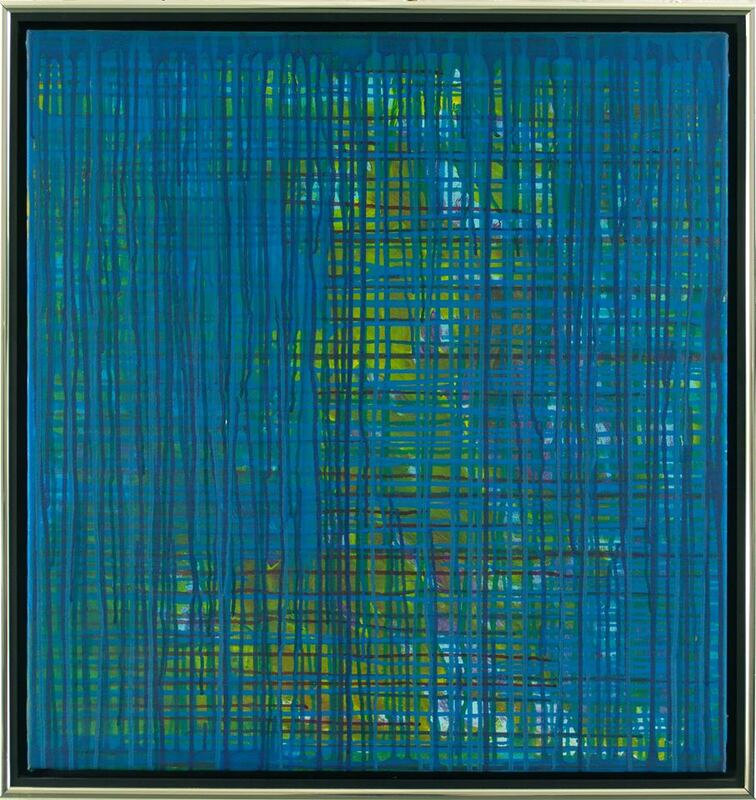 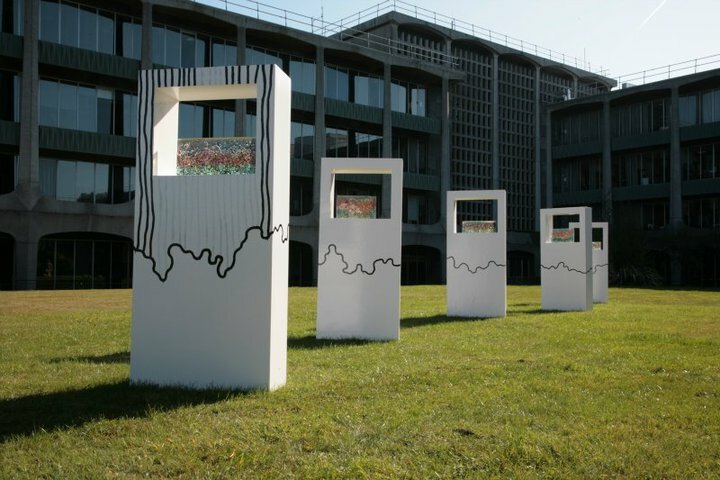 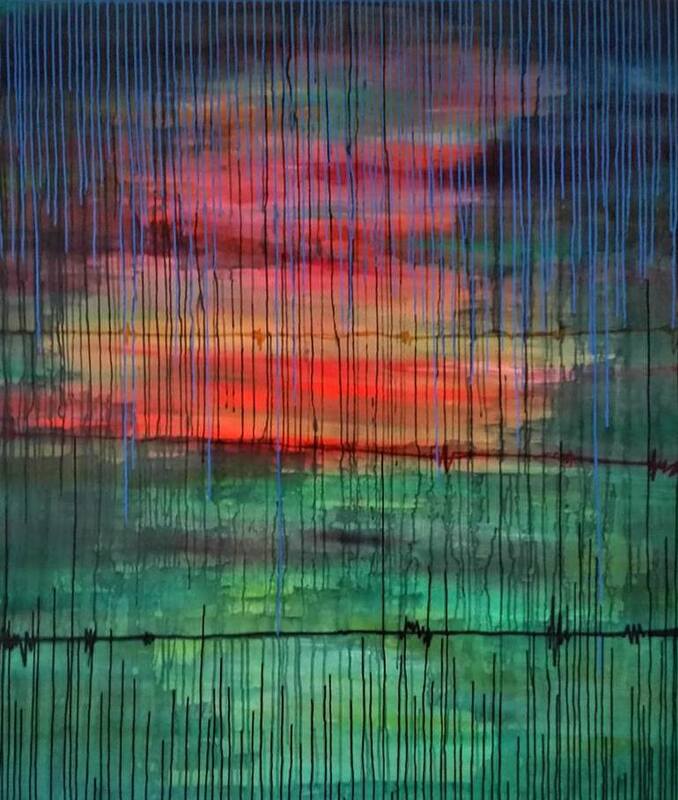