Andrew Bryant Cornwall and Isles of Scilly, United Kingdom
Back to profiles

Andrew studied photography before working as a teacher and later a freelance editor for a-n magazine and Tate. In 2009 he enrolled on the Fine Art MFA at Goldsmiths where he became increasingly dissatisfied with photography, turning to video and fiction. He now almost exclusively paints. Andrew lives in Cornwall dividing his time between painting, teaching and his practice as a psychoanalyst.

When I make a painting it’s important that it retains its photographic quality. Like Vija Celmins, I am painting the photograph, not the object; the photograph is the object. This is important because photographs occupy a reality very different to the that of painting, particularly much contemporary ‘process’ painting, which valorises accident, originality, and the inner ‘truth’ of the artist—all of which I am at pains to avoid.

I tend to select photographs that have been obviously staged, and this enables me to foreground the ‘staging’, in other words the artifice, of painting. In addition, photographs are mechanically and digitally produced and reproduced, which means there is no original, only an endless proliferation of copies, of simulacra. By translating a photograph into a panting then, the image is shifted from one discursive space (that of photography) to another (that of art). Whilst on the one hand this translation reinstates to the photograph what Walter Benjamin called the ‘aura’—namely its originality and authenticity—at the same time it emphasises those more suppressed foundations of art, namely artifice, repetition and the copy.

This is not to say that my paintings are nothing more than a cold illustration of Rosalind Krauss’s 1980s art theory trope; on the contrary, my paintings are deeply personal and profoundly ‘felt’—I couldn’t make them otherwise. I am drawn to lone objects, often referencing mortality, loss or lack, and usually bearing a sense of longing and exposure. I spend a lot of time wandering round the internet in search of such images, a process I sometimes liken to that of Edward Hopper, who rode the El train at night, or walked the city streets, sketchbook in hand, peering into windows in order to glimpse those moments of longing and isolation that would make up his work. 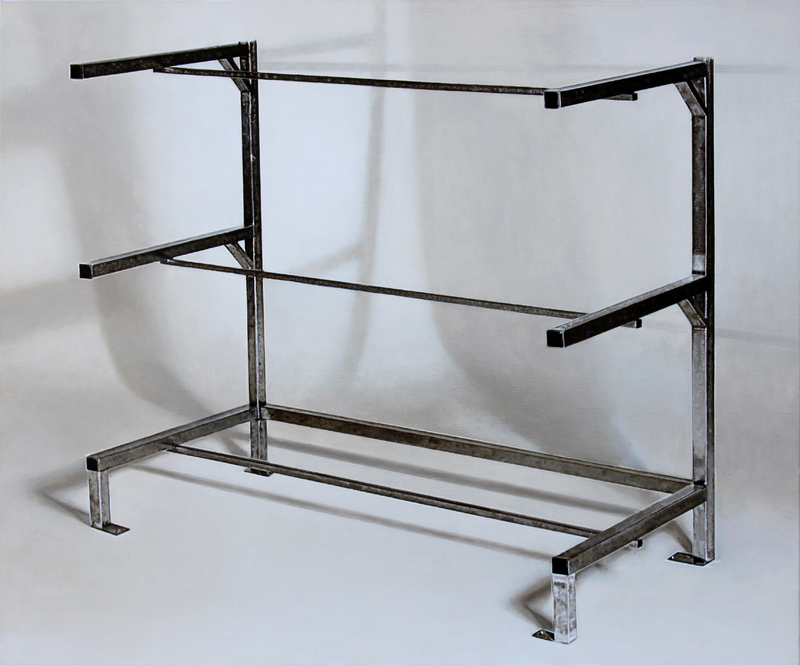