My practice crosses performance, sculpture and moving image, inhabiting a flickering state between rational and non-rational realities, to create powerful mash-ups, hybrid half-truths, not-quite-lies. My work is in the Saatchi Collection and was exhibited in ‘Known Unknowns’ at Saatchi Gallery throughout 2018. I have performed at the Tate Modern and at performance festivals in UK and abroad.

My practice is rooted in performance and everything comes from that live moment. I am interested in the relationships between art as action, art as documentation and art as object. in disrupting and upsetting them. I’m fierce about kicking-up our acceptance of given norms and values around taming and re-wilding of the feminine and our messed up relationship with nature and the natural, human and animal. What is important, worthy of honouring as what is not. MERGING - in order to reconnect with nature / wilder / stranger. Non-ordinary. Anti-rational. The sacred uncanny. Erasing HEAD - crossing out / removing / concealing - so heart can be heard. Powerfully.

For example: The featured image is taken from a performance made live to camera, selected for Fullfrontal, Eastbourne where it is exhibited large in the empty Debenhams window. In this performance ritual I stuff tights with hay, place them on my head and attempt to merge myself with the materials to become a hybrid creature - witch, monster, Goddess, queen. A direct and ridiculous action to make un-sense of my rational thinking head and allow a wilder, stranger, more instinctual and powerful feminine creature to come forward. Looking out of it’s eyes I can only imagine the awesome, magnificent and beautiful thing I have become. 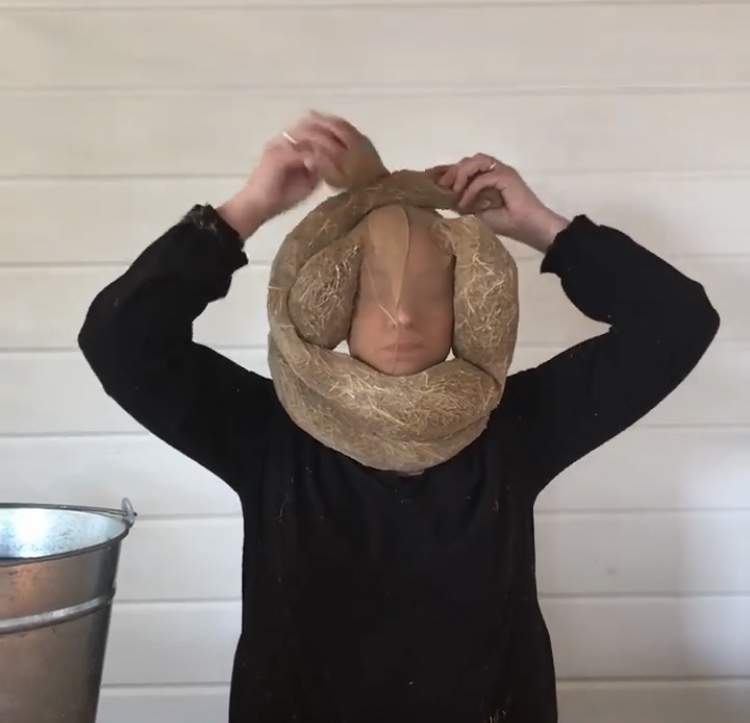