I am an artist predominantly working in print. I have recently been working on a series of Later-Day Saints inspired by medieval medical saints found in The Welcome Collection. I have been involved in many public art projects and am a keen educator. I run print workshops in my studio and at The Whitworth in Manchester. I also have a portable press for visiting schools and art groups.

Over the the last three years I have been working on a series of prints, initially monoprints, which take their starting point from the collection of saintly wood carvings in the Welcome Collection at The Science Museum in London . The depiction of saints is a subject I have been long fascinated with, whether in paintings or adorning churches. Found in illustrations or adorning religious spaces, the power, durability and spirituality of these works has remained, strongly linked to faith. Originally used as comforting symbols for followers, the depicted icons offered hope and solace from medical and personal difficulties. A typical example being St Apollonia, the patron saint of tooth problems, martyred by having her teeth pulled, often depicted in illustrations having her teeth extracted. The seed for this series was sown earlier this year when the media reported that Roberto Mancini had been to church prior to the Manchester City game which secured the Premier League title. His prayers along with thousands of others ( mine among them,) were answered as the game was won against the odds. A sporting miracle! Even in these contemporary times faith and devotion are still strong. From this moment St Last Minute, the patron saint of football fans was born. There followed 80 other monoprints , introducing saints Kindle, Lotto , Tweetus and Selfie to a new audience.

From these monoprints, 57 prints have become etchings and hand-coloured drypoints. This transformation of the familiar encourages the spectator to take a second look at the work, be inquisitive and respond. The saints themselves ,once figures and objects of devotion, are now featured holding or surrounded by modern objects of devotion. The series mirrors the modern day obsession individuals have with object and image. How many people can be seen worshipping St Selfie, St Facebook , St Pit Bull or indeed St Last Minute??! The prints have been shown at The John Rylands Library in Manchester in 2015 , and met with a favourable response from over 5000 visitors. The saints also headlined the Leeds International Medieval Conference in 2016 and were shown at West Yorkshire Print Workshop early 2017.

I have also been working closely with the Whitworth in Manchester, working with hospitals in Manchester and Salford on the health and wellbeing programme, showcasing my work and engaging staff, patients and visitors whilst assisting them in creating their own saintly prints. The series is now complete and stands at 61 saints.

A catalogue featuring the first 20 saints and their life stories is available together with 12 postcards and an enamel ‘pilgrim badge’ of St Selfiie. All 61 saints are exhibition ready mounted in archival mounts. 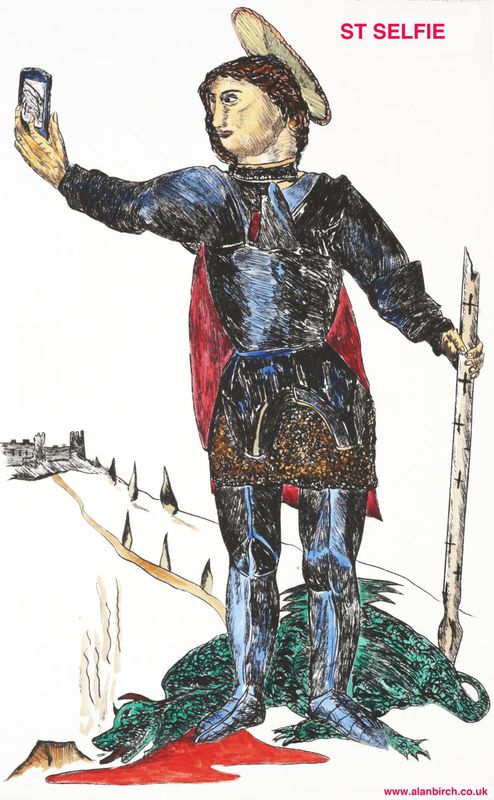