I graduated from university in 2018 with a 1st class degree in BA (HONS) Fine art. Since then I moved back to my hometown of Scunthorpe. I currently work from a shed at the bottom of my garden, which has given me the space to keep making. I am now developing and evolving, learning and getting to grips with my practice away from education - this has been a fun and interesting learning curve.

...Something lurks on the walls and floors - moving, creeping, pushing through. Creatures squirming through rafters and underneath floorboards.

The main aim of my practice is to unsettle and create discomfort; it is about taking over a space and creating a sense of unease. This is achieved by the objects I create and then by how they are positioned and placed to occupy the space they are invading. I create a multitude of long, furry, serpent-like creatures that hook and wind over surfaces like an infestation.

My practice is based around the creatures that I call the ‘Unnameables’. This has come from the story ‘The Unnameable’ (Lovecraft, 1925, cited in Klinger, 2014, p. 114) because of the creatures’ ‘absences of shapes’ (Klinger, 2014, p. 116) and their formless, biomorphic bodies. ‘Biomorphic means fluid, transformable, something in a state of transit from one condition to the next. Biomorphism is governed by process operating on creature-like entities that control all subsequent work in sundry ways’ (Konig, 2009, p. 20). The way they take over, the way they spill out onto the floor they cannot be tamed or stopped. The uncontrollable masses I create are an imitation of nature in their own biomorphic right. As stated before they resemble many different creatures, ‘since all earthly objects are themselves copies of forms, it is not the fact of being a copy that is simulacral, but that of being an untrue nonresemblant copy.’ (Smithson cited in Bois, 1997, p. 77). I have taken shapes from many different life forms: plants like ivy that creep and climb up the wall and squid-like creatures with tentacles.

The ‘Unnameables’ are extremely flexible and can be twisted and knotted together. Kate MccGwire heavily influenced the shape and the way they move ‘it bursts through the white cube wall, creeping and twisting across the floor.’ (Teleri, 2013, p. 40). Her work creates a feeling of fear of suffocation and tightness, through how the sculptures, ‘Siren’ for example, wrap and wind around; the shape and movement of these creatures is something I strive for within my own practice. My creatures do not have a rigid form, meaning they can be pushed and moved in any direction. Every place they inhabit their positions change. They can hook onto surfaces, wriggle underneath and into cracks and crevices large and small. A development of this has been incorporating more limbs on the creatures, this means they now spread further, actively clinging and hugging to spaces rather than being limp.

Creating tension is another aspect to my work, the ‘Unnameables’ do not face you; their ‘faces’ are kept concealed ‘kept hidden, so that others do not get to know of it or about it’ (Freud, 2003, p. 129). This keeps a sense of unease, unsure of whether or not they are looking at you. If they are looking away, what are they doing? What do they want? As humans, we look at each other to see what expression another holds, what emotion they are conveying. The ‘Unnameables’ do not allow this, which then creates uncertainty.

Throughout my practice I use (faux) furs to make the creatures life-like, giving them a sense of realness. Something I wanted to move forward was the way the creatures evolve in the world. I wanted to see how much I could develop them and their believability. Fur gives them an animal-like quality that other materials like PVC or pleather did not give.

Initially, I felt contradictory about the use of fur as it made the ‘Unnameables’ look like animals (to some) and that, earlier in my work, was not something I was setting out to achieve. Now I recognise they do resemble animal-like creatures, and my frustrations when they are perceived as ‘animals’ have reduced. In fact, I now see them as biomorphic: they have a resemblance to living creatures, but they exist in their own right.

Another side to the use of fur is that it has an uncanny resemblance to animals so encourages a tactile approach. However, the fact they are flowing out and spreading over floors, walls and ceilings makes the viewer more wary. Freud, when discussing the uncanny, notes ‘There is no doubt that this belongs to the realm of the frightening, of what evokes fear and dread.’ (Freud, 2003, p. 123). These creatures of mine do not set out to be appealing, they are unexpected, and this provokes uncertainty within the viewer giving a real sense of unease within the installation.

Alongside fur there is colour and from originally being disinterested in colour and it being my last thought when selecting materials, I now work with furs of natural colours that represent living creatures. Using garish colours such as pinks, oranges, purples meant they were not seen as living things, as they did not mimic nature (in furs). Natural coloured fur means onlookers have a connection as they would to another animal.

Their swarm-like behaviour in the space is important. It is no longer just the higher positioning that makes the creatures creepy. It is how they invade a space and the threat of their mass, together, taking it over, whether that is on the floor, walls or above. They are not individuals anymore: they are a hive, a flock, a mass. They are intimidating; they are unnerving. I want them to invade spaces large and small, spaces you would not expect them to come out of, either on their own or en masse.

What was I thinking? These creatures, they keep growing. It was an experiment and now they cannot be tamed, twisting and distorting as they move, feeling their way through like ivy or the sucker-like limbs of an octopus, contorting and wriggling over each other; disgusting. It seemed so harmless at the time…

Placement is key; what is important is creating something sinister as a whole and I achieve this by taking over of a space. One of the creatures scrunched and crawled into a tight set of lockers - being too large for the space, its legs sprawled and collapsed out onto the floor. It has found its home. The others start to join, like mould on surfaces, slowly infesting until the whole place has been taken over, one by one they fill the lockers and sinks until there is no room for more. As a consequence, it starts again.

Why lockers and sinks? They are everyday places that humans use. Once a creature has taken over, been spotted there, it is off-putting… where else are they then? It makes a person wary, on the lookout, uneasy. The environment is a large part of my practice. I like to choose domestic or typically ignored spaces as this idea of something foreign coming in and invading creates unease. It is our space and when “Something on the outside (that) breaks through” (Fisher, 2016, p. 16) apprehension sets in. They lurk, these creatures, they are discomforting. The ‘Unnameables’ have more life to them when they are in unusual, domestic areas; somewhere they should not be, the spaces where we, humans, are vulnerable.

Sci-fi and horror have been a huge inspiration when it comes to the presentation of the space and the invasiveness of my work. The idea of other beings is fascinating to me; the thing that you see in the corner of your eye or the shadowy masses in the dark after the lights have been switched off. I am intrigued by biomorphic strangeness, of the existence of the different and the unfamiliar. Something taking over your space and inhabiting it. Inspirations come from such sources as the ‘Day of the Triffids’ (1954), the way creatures take over, creating fear of invasion and something that cannot be killed or controlled.

I have now started exploring how my work should be shown and the space my work should be exhibited in. I have realised that white gallery spaces, can turn my work into objects. So, having a space that is already lived in brings a sense of life to the creatures. As such, I have chosen to deliberately paint the exhibition space in a ‘grubby’ way, to make it seem that the space is more lived in, that people have rubbed along in there. This is to encourage the idea that the ‘Unnameables’ have invaded without us knowing.

Along with the environment, it is also about placement and presentation of the ‘Unnameables’. The creatures need to be positioned in such a way that they have an ominous presence. If they are positioned incorrectly they can come across as ‘dead’ or ‘lifeless’ so the aim is to have them appear as if they are waiting, waiting…. 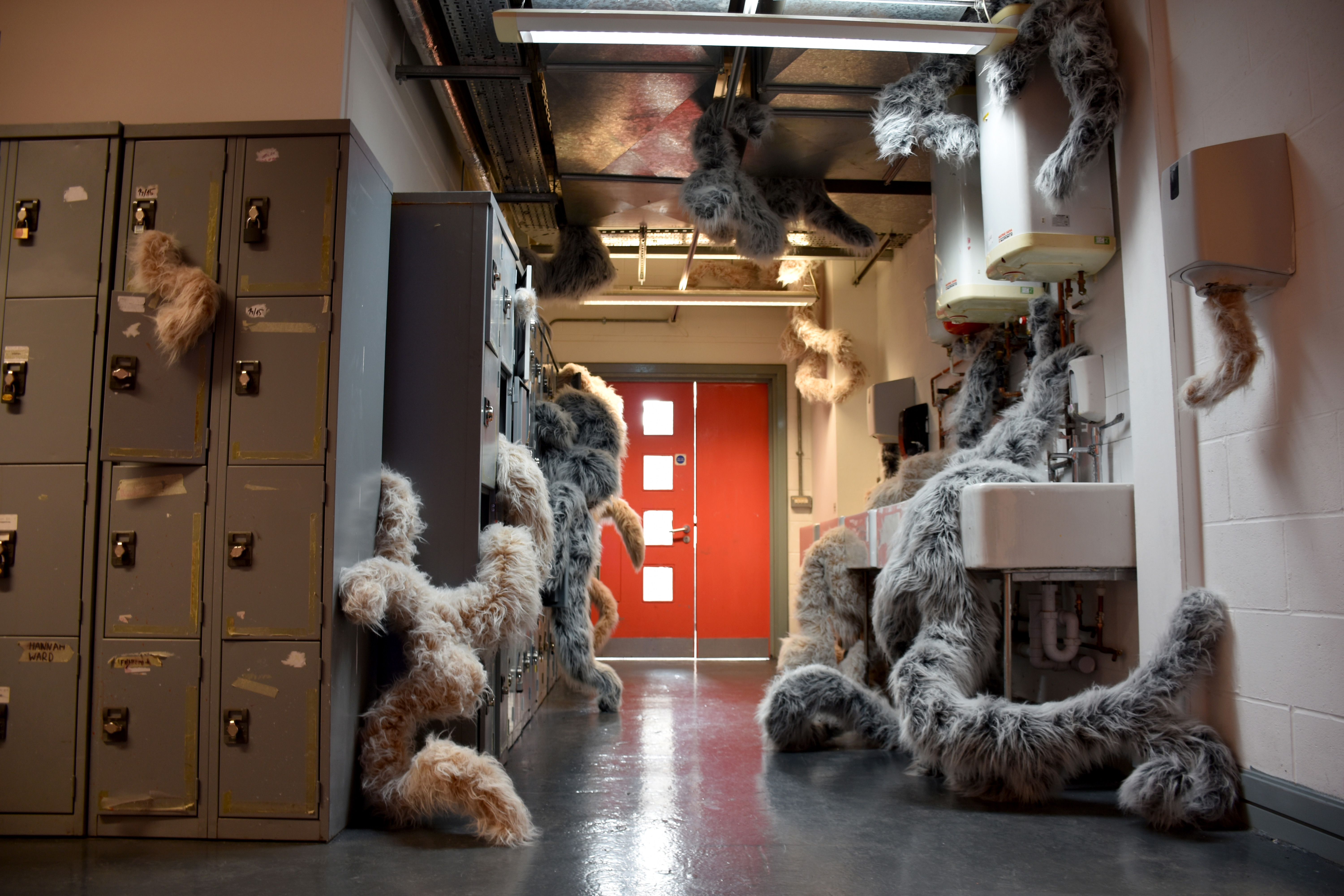 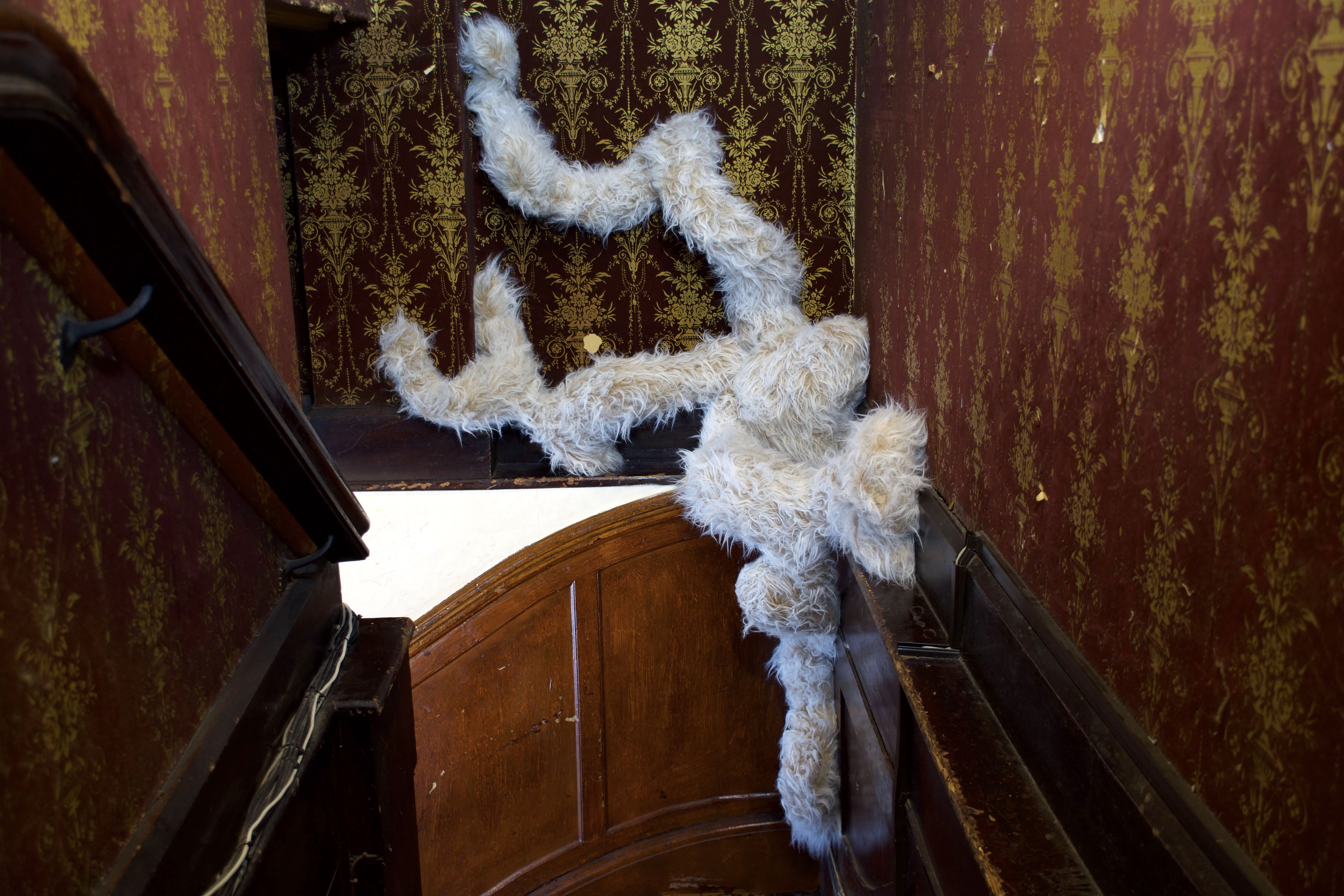