I am an artist predominately concerned with post war architecture, it's inherent ideology, formal aesthetics, structural forms and the effects it has upon its inhabitants. I explores these themes in sculpture, photography, painting, installation and print in order to broaden and investigate related ideas.

My work can be bisected into two visually distinct projects; 2D and 3D, although throughout all my work I explore interrelated themes. Much of my work is concerned with the ideologies intrinsically associated with post-war and contemporary architecture. I have included statements pertaining to two different bodies of work, the first of which ‘Structure of Collapse’ will be exhibited at the Anthrop Gallery, Arts Depot, London in October 2017. The second statement outlines the key concepts prevalent to my ‘City of Nithstang’ series, works from which have been exhibited in Newcastle, London and Athens this year. Structure of Collapse - “Appropriating concepts from architecture, social geography, media studies and archaeology, Joseph Goddard’s Structure of Collapse explores the idea of the city as an enduring speculative technology. Monumental in approach, this sculptural series represents large social and cultural epochs, connecting ancient conceptions of cities built to mirror the constellation of the stars to the astrological age of Pisces, which charts the period from approximately 100 BC to 2500 AD. Drawing upon the work of French Philosopher Paul Virilio, Goddard conceives of urban space as a transmitter and receiver of information, rained down from orbiting satellites, inhabited by the global citizen who absorbs its ideology. The work appears like a set of smoldering, silent witnesses to long periods of time, in which this process has become almost geological. Surfaces present ossified newspaper headlines collected over recent years, imbuing them with traces of the media generated zeitgeist; against a dense, charred and engrained structure suggestive of a longer gestation. Dystopic in resonance, the work suggests endless crises. The central work is inscribed with the Pisces constellation, corresponding to our current astrological age. As a star sign ‘the fish’represents passivity and an inability to shape the world, the spiritual fatalism of an age that is defined by the rise of organised religion, crusades, persecution, the devastation of modern warfare and the rise of global terrorism. Against this backdrop the forms’ evocation of Brutalist architecture point to a socialist movement that arrived too late. Predisposed to the entropic tendency of the Piscean city, these machines for living – hulking masses of concrete – manifest a utopian movement that was hollowed out within a few short decades. With Structure of Collapse being driven by a comparable modernist logic the work inevitably succumbs to the forces it seeks to define becoming a symbol of change beyond our immediate grasp.”

City of Nithstang – Nithstang refers to a Germanic pagan cursing tradition. The practice involved impaling the head of a dead horse on the end of a long wooden ‘nithing’ pole which was directed towards the enemy and target of the curse. In this body of work Goddard presents urban spaces as kaleidoscopic labyrinthine structures which appear to be simultaneously spiraling outwardly and collapsing in on themselves. These contorted, maddening perspectives offer a framework through which to view ghostly specters snared in the throes of pain. Blunt concrete trauma and lacerating shards puncture anonymous forms distorted with agony. The work is a visceral and asserting combining of modern architectural structures, symbolizing the differing strata of social and economic classes. These forms are melded into a singular mass of structural violence devoid of humanity and confront the viewer to bear witness to the twenty first century horror. With use of low-fi cut and paste techniques the work draws on Situationist and Punk aesthetics, energizing the work with the same furry that empowered the movements from the 50’s and 70’s. The surfaces of the work are torn apart by piercing architecture, erupting viciously from a figure entrapped in torment. Beneath the skin and bone of the subjects, out of sight of the viewer the forms splinter without logic, without remorse and rupture sadistically. The work attests to the proliferation of urbanism in its most unrelenting, specious, dispassionate trajectory and offers a nightmare vision of the brutalizing machinations of our socio-political climate. City of Nithstang takes on the appearance of a medieval science fiction or worse yet, contemporary sacrificial barbarism. The series draws on Nordic traditions and dark age practices enacted in a modern context; an allegory for the brutal, dehumanizing effects of global-elite cities which ward off and curse its victims, cities in which impact is inevitable and escape is impossible. 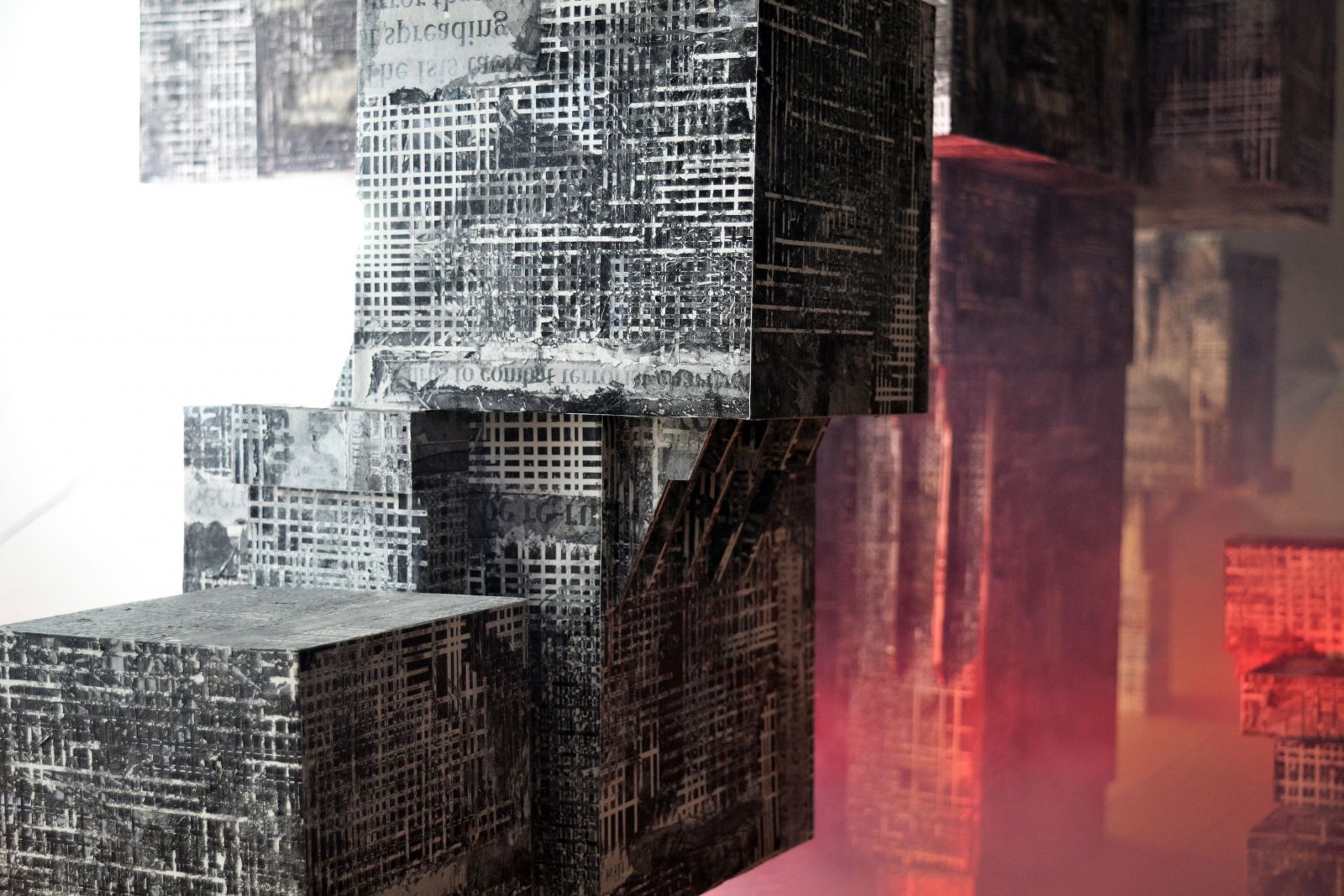 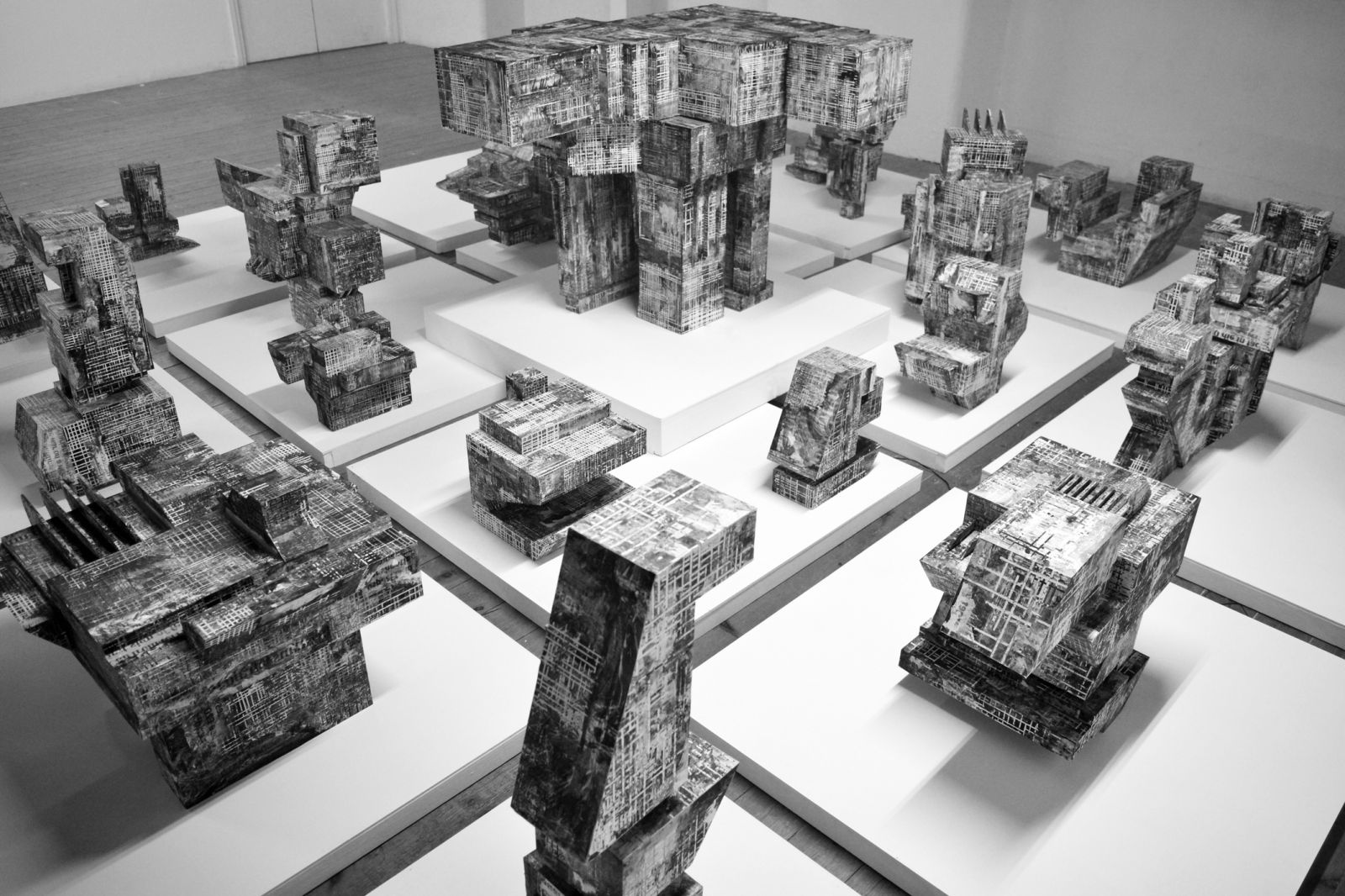